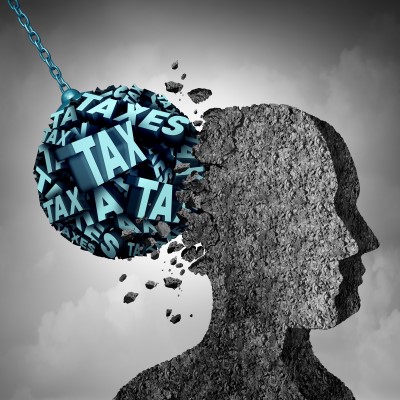 Tax pain and financial fees headache as text shaped as a wrecking ball damaging a human head made of concrete as a financial and business metaphor for budget debt management stress with 3D illustration elements.

China has embarked on a major reform of tax laws that could have sweeping implications for high-net-worth individuals inside the country, not to mention Chinese-Canadians and Chinese citizens who have investments in Canada.

Perhaps the most high-profile example of the country’s efforts to close tax loopholes and boost tax revenue are the recent accusations lodged against superstar actress Fan Bingbing. The X-Men: Days of Future Past actress was recently detained and questioned by Chinese authorities and has reportedly agreed to pay nearly US $130 million in back taxes, penalties and fines in exchange for avoiding jail time.

The news comes on the heels of a major and ongoing revision to the country’s personal tax code—the current progressive systems levies rates of up to 45 per cent and as little as 3 per cent on individual taxpayers, with a flat tax of 20 per cent on income such as property transactions and dividends—that will see a move to more widespread use of annual tax levies, more deductibles and increased access to lower tax brackets for the masses, among other measures set to take effect January 1, 2019. Many Chinese will see a cut to their personal tax bill, while those with multiple income sources, for example, may pay more. Remunerations and royalties will now be added into salaries to determine an individual’s tax bill, maxing out at the upper 45 per cent threshold.

Of even greater relevance to ex-pat Chinese is the fact that the State Administration of Taxation—Beijing’s equivalent to the Canada Revenue Agency—has spent years investing in new technology designed to accurately track transactions and income. Gone are the days when avoiding tax—a veritable sport for tax-conscious Chinese—was a game played with relative impunity.

Now, the government is using sophisticated technology to track and tax a wide range of transactions—all of which are connected to taxpayer identification cards that record taxable line items such as salary, dividends and rental income. New levies on investment income and capital gains are sure to alarm wealthier Chinese who maintain sizeable stock portfolios and real estate. Individuals are now also limited to just two accounts at any one financial institution. In addition, transactions via popular mobile apps such as AliPay and WeChat—which once slipped past the SAT—are now being monitored by tax authorities, all with the end goal of further boosting tax revenue.

With absolutely every piece of information about personal transactions now linked directly to government-issued ID cards, tax evasion or avoidance is all but impossible.

China has also bolstered its authority to track indirect equity transfers to overseas tax havens for both individuals and companies, while Chinese tax residency requirements have been clarified and might finally be enforceable. In general, individuals who reside in China for more than 183 days in a calendar year are considered tax residents in China. Those who own property in China might also be subject to income tax.Guidelines, exemptions and supplementary interpretations on the subject are currently in draft form, and are scheduled to take effect on January 1, 2019.

Overall, Beijing is working to synchronize its tax system to align more closely with those of other countries such as Canada. More income is being subject to income tax as the country implements an integrated approach to taxation that groups all income and taxes it at a higher rate, rather than having employers withhold taxes at source.

Before China adopted its own version of the OECD’s Common Reporting Standards, interest income from non-resident accounts in Canada was largely tax free, while dividends from privately owned companies were subject to withholding for tax purposes. Many Chinese citizens have children who move to Canada and are tax residents, but those parents are classified as visitors. They often open non-resident bank accounts in Canada as a tool to move funds overseas. In the past, this information wasn’t repatriated back to China. That has changed.

Now that information is available to the SAT, Chinese immigrants to Canada (including visitors) must be honest, transparent and fully disclose all sources of income for tax compliance purposes—and be prepared to pay tax on their worldwide income. There is literally nowhere to hide for Chinese hoping to funnel money out of their country or earn it overseas tax-free. There is also greater pressure on Canadian tax professionals who cater to the Chinese ex-pat community to up their game as compliance standards become more stringent.

While Canada will remain a destination for wealthy Chinese seeking overseas investment opportunities, advanced technology and a determination on the part of Beijing to squeeze the country’s top earners means the Great White North no longer offers the same tax-sheltering allure as it once did.